Welcome to the new nickvolkert.com

It’s been a crazy two year journey to get this off the ground.

Yeah, it’s crazy. But a LOT went into getting this up, running and LIVE.

First: Learning React. I wanted to take advantage of the knowledge and progressive web technologies into my new site. My old site was composed exclusively on Dreamweaver and just got too big and cumbersome to make simple updates without touching the hundreds of pages on the site.

A frustration I had with Dreamweaver is making slight modifications to links based on their relation to the site folder structure. Just got aggravating to toss a card on a series page, and having to rework the link nesting to be more or less folder relative "../" dudes in the link and image reference.

Second: Learning SASS (Also BEM). I wanted the ability to keep from repeating myself as much as possible, so taking advantage of SASS variables and mixins saved a lot of repetition of width and padding declarations. It also helped with visual consistency to have uniform CSS that was regimented by the variables.

Third: Converting over ten years worth of works into JSON files. I could’ve tossed everything in a database, but I wanted the ability to have version control on the files, thus using JSON (learning from an episode of a data loss from a compromised database).

The goals I wanted to go into my site update:

1. Ability to have a single source of truth for project images, titles, descriptions, and links.

I would have to do a lot of repetition, copy/pasting in my old site and there are little inconsistencies from instance to instance of a card. Using JSON that fed into a card component on React, I had that one singular title, image, description, link, etc. And with React it’s all a global declaration, so I don’t have to worry about nesting nonsense.

2. Single components that control the design of cards, pages, and headings.

I used components on my new portfolio, dictating the html structure of each reused component on the page. Do I want to add quotes around a title? Easy, just wrap the title prop with quotes. Done. Applies to all instances. In my previous site that’d be a weekend of editing hundreds of html files, probably having errors in a few because my brain is glazed over from repetitive tasks.

Admittledly, this was the last checkbox on my tasks because of the dread of testing all the viewports. But after months of kicking the can down the road, it only took me a weekend to knock out. Just a few media queries and moving widths from a general CSS declaration to a viewport min or max width and I was good to go.

My old portfolio was black and white, and recently blue/gray and white after I did a test-run of my new color scheme and font stack. My personal color scheme I usually rock out is a poppy red tee with a blue/gray hoodie and my white panel ’84 Sox logo hat. So I wanted that to be my updated branding. Those colors just hit me and feel like “me”. And hey, if I want to pivot to a different color scheme, it’s just a few SASS variable updates away.

5. Consolidate over 10 years worth of work into one master site, with consistent code, branding and updated site architecture.

My previous site was docked under “/portfolio”, and was that way to “hopefully” point people to that when I was a freelancer, and my other random mini sites, docked under nickvolkert.com/“whatever” had their own mini sites that were tragically out of date and fell off the radar of myself, SEO, web crawlers and the general public. So with a new paint job, I was hoping to give some life to old work, projects and what not into this new site. And hey, it’s nickvolkert “slash” the thing as opposed to nickvolkert “slash” portfolio “slash” main category “slash” actual work.

Thankfully, just as a big ass site that was disorganized AF chilling on the internet without many updates, I had a decent domain authority, or “DA” as it’s called in Marketing and SEO. I took a serious hit when I shit-canned that site for this update, but I have a lot more work and firepower in this relaunch, with updated site structure, updated descriptions and added mobile responsiveness as well as added speed with the use of a CDN to load my images. Interested to see how my DA goes as I continue to blog and update this site on at least a weekly if not daily basis with new works.

I always loved site navigations that show/hide links on browser width. If you resize mine you’ll see a lot of links show/hide as well as I have a “quick nav” with my main portals of work. I also am trying a dropdown nav, that will allow me to show my work verticles, whereas my old site I had a limited stack of links that were all visible on load.

Another thing is I always wanted a big ass footer. I love big ass footers, and I can’t lie. The ability to have that decade worth of work right there at the page bottom with all my links, social links, and contact info is a huge thing for me. Feels like I’ve arrived after tolling away as a freelance artist with my late hours poured into personal projects on print by demand sites and for social. So yeah, scroll down and check that bad boy out. I need to figure out CSS grid one of these days, so the one you see is some float left margin declaration wizardry, but works as designed, so hey.

8. Updated work links, next and previous links, and richer pages for full views.

Learning how to go to card to full view page in React took me a hot min, but after I got that figured out the next step was to have richer work pages that had related work as well as next and previous links of work. Want to piss away a whole day looking at my 200+ rendered works, well giddy up partner, now you can.

I also had links to my print by demand stores for works that were deader than a doornail; unchanged since I posed the work on the page in the early 2010s and on. Why is that? A lot of the shops updated their site structures, as well as a big one: the links going from http: to https:. So I think those should be updated and working now. Buy some prints and tees please!

Well, at least a dude can hope. Having sites, sub sites, mini sites and as well as going by my PBD name “nickv47” affected my SEO. I’m not the only “Nick Volkert” out there, but I hope if you’re looking for Nick Volkert, artist/illustrator guy, my shit ranks on the top.

My old site was a cumbersome piece of shite. When I worked with recruiters pointing them to work was either pointing to them to a certain vertical on my site, and then hearing how the clients were confused or overwhelmed. Someone in passing wants to see my work and I’m like, uhh, do I give you my confusing dot com link? My insta? My dribbble? Tumblr? So this site ends all that. This is the keystone, that you can view a work, get a link to all the places to buy it.

I also can now point back to my site when I post on tumblr, dribbble, instagram so interested parties can buy from the site they fancy. The old way was posting a new work and then a direct link to the shop I was hoping to get sales in.

11. A nice tribute to my over decade worth of work.

I’ve been freelancing, scratching by, working as a full timer at a variety of shops across Chicagoland, and always had a thread of my works produced first for Threadless, chasing that elusive print, and then the PBD shops that started popping up. It’s been nice to get worldwide exposure on those platforms, as well as establishing that as a fun side hustle, so this site is a nice gallery, bookend, living omnibus, whatever, of all those hours of works produced.

A long storied issue I’ve had with my portfolio, is that what I do confuses the hell out of everyone and they don’t know what to make of me. And what do I do exactly? Well, illustration, cartoons, front end development, design, branding design and User Experience and User Interface Design. My toolbelt is robust, y’all. So with that in mind, focusing on illustration and my PBD sites for now, eventually my artworks. I may add the rest of the stuff, but just a short hand that will point to a site that just focuses on that, to keep the lanes clear. I was behind a rock and a hard spot a few years back and was mad crazy updating my works with all the things, just doing a blanket udpate without focus, and finding work was a pain. So hopefully keeping this just fun illustration stuff, and a side site that’s industry focused will help. I have to think so.

13. Blogging and tricks and tips.

Been a creative for almost two decades now after graduating from NIU with my BFA in ’02, and then again with my MFA in ’06 and I’ve picked up a thing or two working professionally as well as on personal works. So with that, in and hopes of building my DA, I’m eager to begin sharing tips and tricks on not only creativity, but UX and development. My old site just wasn’t worth putting the content on. I had a bad nesting architecture that I would’ve been adding all sorts of content juice into which I would’ve dropped and lost all that SEO and DA on with the update. So I’ve been sitting on it, and admittedly thinking on how to tackle it. So this is blog post #1 on nickvolkert.com/blog (Better than nickvolkert.com/portfolio/blog, right?!) and hopefully the first of many.

Reading, it's for your eyeballs! 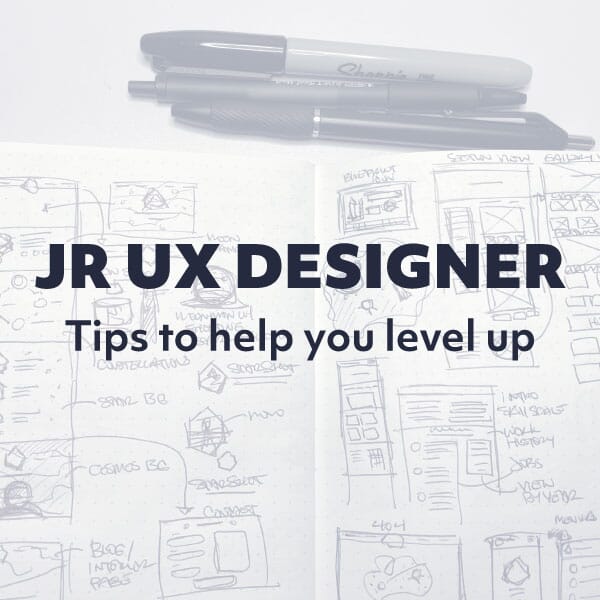 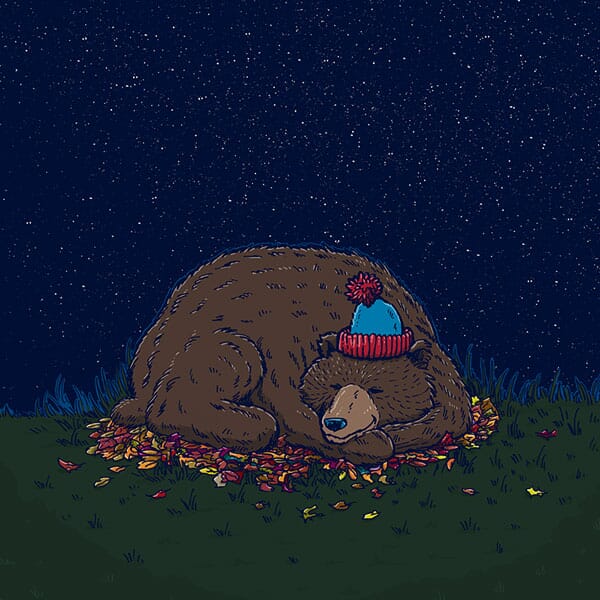 It's cold, miserable, the roads are dangerous, so it's time to get creative while you're huddled up in your warm home.

"Welcome to the new nickvolkert.com"

I love making personal works that I use as a vehicle to explore to constantly learn the programs I use on my day to day, and push my artistic abilities. 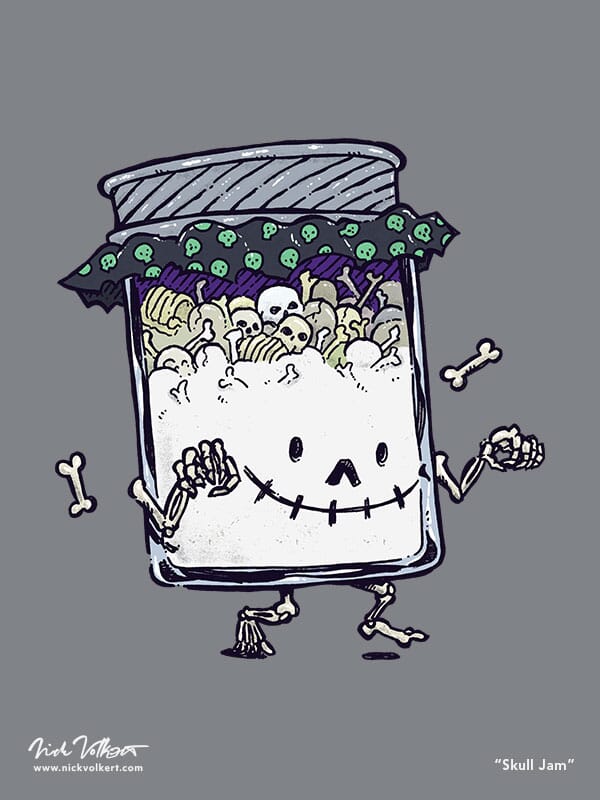 Skull jam is definitely a pretty grim form of jam, but hey, it's full of calcium! 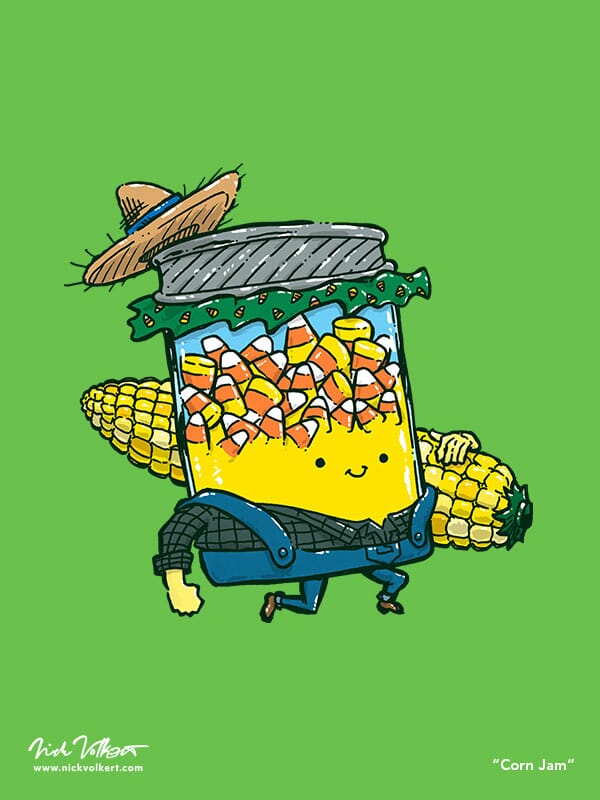 Corn jam is probably the lesser known of the jams, but still down home and as Midwestern as they come! 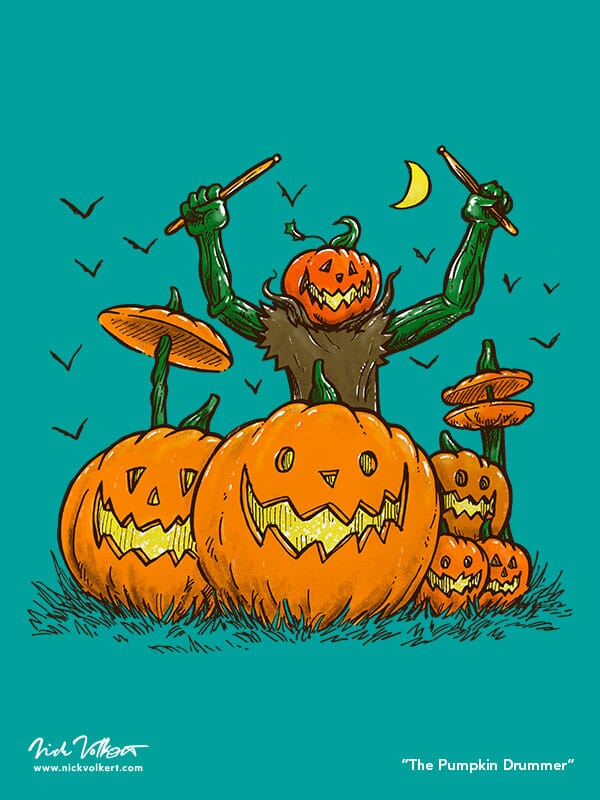 Solos, mad steady beats, The Pumpkin Drummer has your back to keep the spooky tunes moving along in perfect time!

Vector works that a fun, cute, scary, and a bit dangerous! 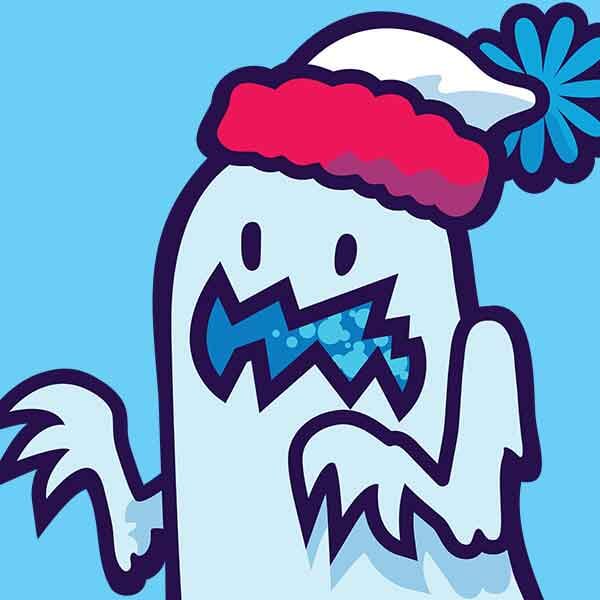 Do ghosts wear stocking caps in Chicago because it's so cold most the year? I would argue that yes, yes they do. 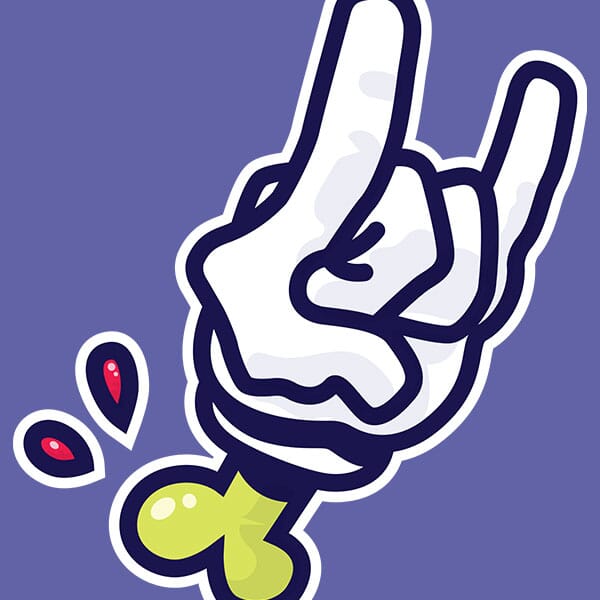 A metal fan in life and in DEATH (maybe death metal even). This flying hand with the horns is here to party. 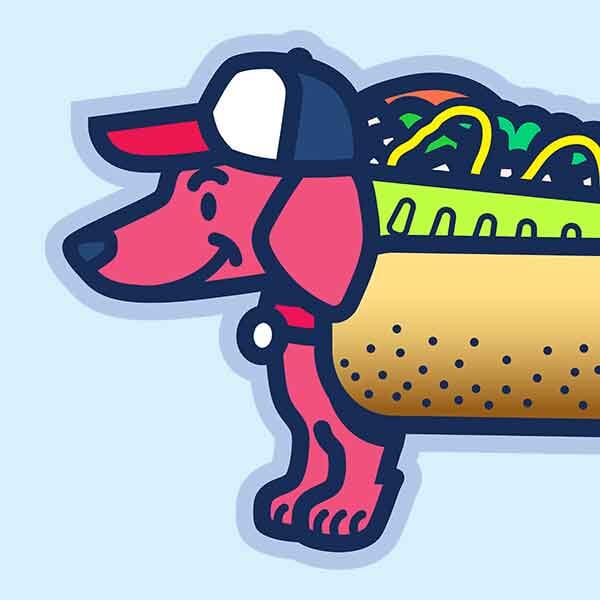 Winning ugly is still winning right? This wiener dog knows that and is repping the colors of the south siders while rocking a sweet Chicago-style hot dog costume